You are a Super Star!  Right. And who do you want on your team? SUPER STARS!  People that are at least equal in your skill . . .Right?

YOU ARE ONE RECRUIT AWAY FROM EXPLOSION!

But think about this.  What would happen if you create two teams of people of like minded people that were focused on assisting others build dreams—who had exceptional skill—people that on a scale of 1 to 10 you would classify as a seven or higher?

If people were M&Ms and the million dollar earners in network marketing were green M&Ms—you want to go after the green ones!  You are not out to save the world.  People need to qualify for your team.  There are only so many hours in your day.

Who are you going to recruit—someone who has great people skills, a good job, and sees the value in building their dream (versus their boss’) or the waitress at Denny’s who is telling you this is a pyramid and they have to check with their spouse.

MLM Academy system will assist anyone who wants more out of life—but the reality is—it is a fast track for those who will follow the system—a two to five year plan where you can stack the deck in your favor to achieve success.

Remember—and we cannot say this strong enough with flashing neon lights—RECRUIT UP.  What does that mean?  Recruit people that have better skills, have better jobs, maybe live in a better neighborhood.

We have the GIFT OF FREEDOM

Everyone has the same set of challenges—just at different levels.  Some people may be figuring out how to pay $800 to the landlord for rent and pay their minimum visa payment and others are trying to put together the 6 mortgage payments for the ocean front homes and the lease payment on the Ferrari.  Maybe that accountant just saw his co-worker laid off and knows he is next so he better put a Plan B in place.

A couple of things here as you go through this module –

Kinda makes it easier to show the plan when you are not dependent upon the outcome!

So what are the components of IRRESISTIBLE Recruiting?

We’ve included modules on each of these topics in the Inner Circle Silver Master Mind Members Area (Log In/Join here) and some extra tools to assist you in becoming a true Super Star IRRESISTIBLE Recruiter!

Be sure to have fun with your business.  People can tell when you’re having fun.  They will see your excitement.  It will be contagious.  That’s more important than the facts.  When people see you on fire, they will say, “What is she doing?”  or “What is she so fired up about?”  I gotta know.

It gives you the perfect opening!

7 Fundamentals to Transform Your Business 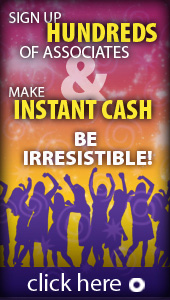